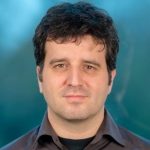 Orlando Moreira is Fellow and Chief Architect at GrAI Matter Labs, a neuromorphic chip company, where he is responsible for the design of the neuromorphic processor core. He graduated from the University of Aveiro and he holds a PhD in Electrical Engineering from the Eindhoven University of Technology. He worked at Philips Research (2000-2007), NXP Semiconductors (2007-2008), ST-Ericsson/Ericsson (2008-2015) and Intel (2015-2018). From 2007 to 2009, he lead a joint Nokia/NXP/ST-Ericsson team in developing a real-time software architecture for multi-radio. At Ericsson, he designed a system architecture for a Dual Sim Dual Call modem. At Intel, he lead a tools team delivering the software development kit for imaging processors, including simulators, compilers and debuggers. He has published research on neuromorphic computing, reconfigurable computing, real-time multiprocessor scheduling, resource management, and temporal analysis of data flow applications.

Neuronflow: Delivering on the promises of Neuromorphic computing

Neuromorphic computing promises to deliver ultra-low power inference by mimicking the workings of a biological brain. In this talk, we will introduce the main concepts, promises and challenges of neuromorphic computing. We will argue that, in the quest for practical solutions for edge processing, it pays off to follow a hybrid approach, that combines neuromorphic engineering with established computer architecture.  Central to this is the concept of sparsity, which we will introduce and discuss. We will give an overview of GrAI Matter Labs’ Neuronflow many-core architecture, as implemented in GrAI One, our first chip. this design is inspired by brain biology but not necessarily biologically plausible. Neuronflow exploits structural, spatial and temporal sparsity to dramatically reduce latency and power consumption. We will highlight some of the use cases running on GrAI One, results, learnings, and discuss the future of neuromorphic computing.